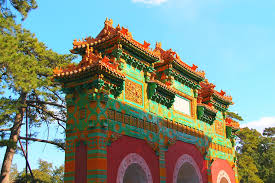 As they were walking down the docks in Shanghai the pastor quietly said, “Marie, go back to Norway! Don’t you know you can die here?!” It was September 1 st , 1901. Just a year earlier, in 1900, the Boxer rebellion was in full swing. The

Boxer rebels killed thousands of Chinese Christians and hundreds of Christian missionaries, destroying many churches. The persecution was so heavy that Christians that owned a Bible would bury it in the ground. Pastors were openly executed in the marketplaces. If Christians were found with a Bible, the whole family would suffer gruesome persecution or even death.

Thousands of western missionaries quickly fled China.
Now, one year later in the midst of one of the most terrible persecutions the world has seen, Marie Monson was actually GOING to be a missionary in China.

The pastor talked to the young lady with a very concerned look. This was not the time to
become a missionary in China. He said, “Marie, go back to Norway! Don’t you know you can die here?!:”

Marie answered, “Pastor, I already died in Norway!”
You see, she understood the scripture in Galatians 2:20, ‘I am crucified with Christ: nevertheless I live; yet not I, but Christ liveth in me: and the life which I now live in the flesh I live by the faith  of the Son of God, who loved me, and gave himself for me.’

God used Marie incredibly in China. Few people in the West know her name today, but through Marie Monson many people came to follow Jesus. During the Shantung Revival that began in 1927 and lasted ten years, God used her like a torch. The Spirit anointed her eyes to see the true spiritual state of the church and gave her courageous words to expose the spiritual darkness that was prevalent in China, even—perhaps especially—within the church.

Marie went from city to city in China asking a simple question, “Have you been born again?”

She would ask seekers and pastors and missionaries—no one was off limits. The Spirit would work through her piercing question and melt cold hearts, revealing hidden sin and calling people to surrender everything to Jesus. (Blog by Sarah Alexander, imb.org)

Today, the underground church in China honors Marie greatly because they say she laid the foundation revival that, despite heavy, ongoing persecution, has brought millions upon millions to come to Christ in China.
Are you willing to go down the road of sacrifice?