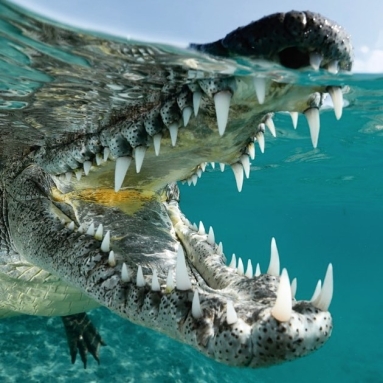 Bouncing on our toes, our little girls looked through the strong metal fence. The huge crocodile lay in his cage. Several scars from battles covered his body.

Our Kenyan guide said, “His name is Saddam.”

Named after Saddam Hussein, the dictator of Iraq at that time. The guide of this park in Mombasa went on to explain they had named this croc after Saddam because he would fight any other crocodile they put him with. He was just plain dangerous, but in the isolation of that cage, he seemed so harmless.

A year or two later Saddam Hussein was taken captive by American forces. He was found alone in hiding. When the entourage and the bodyguards were all gone, when his influence had been stopped, he seemed just like a normal person. He was like the caged crocodile in Kenya.

2 Corinthians 10:4-6 says, “The weapons we fight with are not the weapons of the world. On the contrary, they have divine power to demolish strongholds… we take captive every thought to make it obedient to Christ. And we will be ready to punish every act of disobedience, once your obedience is complete.” (NIV)

When our thoughts are allowed without godly restraint, they become like little dictators in our lives. One thought influences other thoughts. Soon a devilish stronghold is formed. These strongholds can seem invincible. Alcohol or drug abuse, or any other addiction, are protected by lies, deception, and theft. One sin assists and strengthens the other.

But … we have weapons that can demolish strongholds! If you actively take each godless thought captive and put it in confinement, all its dictator power is gone.

Get in the presence of God. In prayer, let the Holy Spirit show you what sins are dictating your life. Take sides with God against yourself and repent.

God has victory for you!